This is the story of Ayatollah Khomeini's rise from dutiful student in Iran to one of the 20th century's most ruthless leaders. As a 70-year-old grandfather, Khomeini pulled off one of the most daring revolutions in history and served a crushing blow to America.

After his father was killed by bandits, the young Khomeini was brought up by his mother and aunt. However, when only fifteen he suffered further loss as his aunt died and shortly afterwards his mother also passed away.

Under the guidance of his elder brother he learnt Islamic science, literature, and philosophy, eventually becoming a leading authority on theological law.

In 1962 he became politically active and openly protested against the torturing and imprisonment of the people by the Shah of Iran, whose regime was seen to be safeguarding the interests of the US.

On 3 June 1963, Khomeini made a historical speech against the dependence of the Shah’s regime on foreign powers, and its support of Israel. He was immediately arrested, but his imprisonment inspired major public demonstrations of support, that were eventually crushed by government troops in tanks.

In November 1964 he was arrested for a second time, and sent into exile, first to Turkey and then to Iraq, where for fifteen years Khomeini wrote and lectured against the regime in his homeland.

After the Iranian government had been overthrown by an Islamic revolution in 1979, and the Shah sent into exile, Khomeini returned to Iran, where millions of people were waiting enthusiastically to greet him.

In response to the exiled Shah's admission to the United States in September 1979, a large crowd seized the US embassy in Tehran, taking 52 American citizens hostage. After 444 days of economic sanctions, diplomatic negotiations and a failed military rescue, the release of the remaining hostages was finally secured.

In February 1989 Khomeini broadcast a fatwa on Tehran Radio, issuing a death threat against British author Salman Rushdie and his publishers, over the book Satanic Verses.

Grand Ayatollah Sayyid Ali al-Husayni al-Sistani (Arabic: السيد علي الحسيني السيستاني‎ Persian: سید علی حسینی سیستانی, born August 4, 1930) is the current highest-ranking Twelver Shi'a marja in Iraq, who leads the Hawza of Najaf. He is a Grand Ayatollah and Twelver Shia marja' born in Iran and residing in Iraq since 1951. He is currently the preeminent Shia cleric for Shia in Iraq and around the world [1] as well as an important political figure in post-invasion Iraq.

Sistani was born in Mashhad, Iran, to a family of religious scholars. His grandfather, for whom he was named, was a famous scholar who had studied in Najaf. Sistani's family originally comes from Isfahan. During the Safavid period, his forefather Sayyid Mohammad, was appointed asSheikh ul-Islam (Leading Authority of Islam) by King Hussain in the Sistan province. He traveled to Sistan where he and his children settled, which accounts for the title "al-Sistani" in his great grandson's name today. Sistani began his religious education as a child, beginning in Mashhad, and moving on to study at the Shia holy city of Qom in central Iran in 1949. After spending a few years there, in 1951 he went to Iraq to study in Najaf under the late Grand Ayatollah Abu al-Qasim al-Khoei. Sistani rose in religious rank to be named a Marja in 1960 under the military dictatorship of Iraqi president Abd al-Karim Qasim.[2] At the unusually young age of 31 (1961) Ayatollah Sistani reached the senior level of accomplishment called Ijtihad, which entitled him to pass his own judgments on religious questions.[3]

When Khoei died in 1992, Sistani ascended to the rank of Grand Ayatollah by the traditional method — through peer recognition of his scholarship. His role as successor to Khoei was symbolically cemented when he led the funeral prayers of his widely esteemed teacher and he would go on to inherit Khoei's network and following. With the death of other leading ayatollahs in Iraq including Grand Ayatollah Mohammad Mohammad Sadeq al-Sadr, Ali al-Sistani emerged as the preeminent Shia cleric in Iraq. As the leading Ayatollah in Najaf, Sistani oversees sums amounting to millions of dollars. Sistani's followers offer him a fixed part of their earnings, which he spends for educational and charitable purposes. Sistani's office reports that he supports 35,000 students in Qom, 10,000 in Mashhad, and 4,000 in Isfahan.[4] He also oversees a network of representatives (wakil) "who promote his views in large and small ways in neighborhoods, mosques, bazaars, and seminaries from Kirkuk" to Basra.[5]

He has a substantial following among Shia's all over the world, as he is the current Nayb-i Imam (Preeminent Marja) of the Twelver Sect, of Shia Muslims. In Iran as a result of the post-invasion opening of the Iraqi shrine cities of Najaf and Karbala to Iranians, including "great popularity and influence among" the bazaari of the city of Qom. Many Iranians are said to return from pilgrimage in Iraq followers of Sistani.[6]

Sistani has survived the persecution that killed many other Shia clerics. His mosque was shut down in 1994, and did not reopen until after the 2003 invasion of Iraq which toppled the Ba'ath regime. Since that time, he has usually kept to himself in his house in Najaf. His behavior is seen by many as a protest against persecution, but others consider it to originate from the house arrest orders issued by the Ba'ath Party.[citation needed]

Despite his seclusion and inaccessibility, Sistani has extensive influence throughout the Shia Muslims all over the world especially in Iraq, Iran and Lebanon, a network of junior clerics who convey his teachings. Sistani patronizes several leading Shia charities and provides financial support for most of the Shia religious schools or madrasas and mosques around the world. Due to his influence, he has played a quiet but important role in the current politics of Iraq. He is particularly known for forcing the Coalition Provisional Authority into a compromise on the constitutional process, for issuing a fatwā calling on all Shia especially women to vote, and for calling on Shia communities not to retaliate to Sunni sectarian violence. He is also the one who called for a truce at the Imam Ali Mosque in Najaf where Muqtada al-Sadr and his Mahdi Armywere cornered in a gun battle siege in August 2004.

In early August 2004, Sistani, who has long been suffering from a heart condition, reportedly suffered serious health problems and he travelled to London, United Kingdom, to receive medical treatment. It was the first time in many years that Sistani had left his home in Najaf, which seems to indicate that his medical condition was serious enough for caution.

Since the invasion of Iraq in 2003, Sistani has played an increasingly wider political role in Iraq, and the Western mainstream media has called him the "most influential" figure in post-invasion Iraq.[7][8]

Muqtada al-Sadr, who is 43 years younger than Sistani and the head of an independent militia known as the Mahdi Army, has risen to prominence in the course of 2004 and his military activities have undermined Sistani's influence. Muqtada al-Sadr launched an attempt to fight what he perceives as the "oppressive foreign forces" in the holy city of Najaf while Sistani was out of the country.

Shortly after the invasion began, Sistani issued a fatwā calling on Shia clergy to get involved in politics to guide masses towards what he sees as "the clearer decisions", and to fight what he sees as "media propaganda". However, as the summer of 2003 approached, Sistani became more involved, though always through representatives, never directly. He began to call for the formation of a constitutional convention, and later demanded a direct vote for the purpose of forming a transitional government. This can be seen as a sure path to Shia dominance over Iraq's government, since most observers say that Shia make up about 60% of Iraq's population. Subsequently, Sistani has criticized American plans for an Iraqi government as not being democratic enough.

Sistani's edicts and rulings have provided many Iraqi Shia religious backing for participating in the January 2005 elections -- he urged, in a statement on October 1, 2004, that the people should realize that this was an "important matter" and he also hoped that the elections would be "free and fair . . . with the participation of all Iraqis". He issued a fatwā telling women they were religiously obligated to vote, even if their husbands had forbidden them to do so.[9] "Truly, women who go forth to the polling centers on election day are likeZaynab, who went forth to Karbala."[10]

He has consistently urged the Iraqi Shia not to respond in kind to attacks from Sunni Salafists, which have become common in Sunni-dominated regions of Iraq like the area known as the "Triangle of Death", south of Baghdad. Even after the destruction of the Shia Al-Askari Mosque in Samarra in February 2006, his network of clerics and preachers continued to urge calm and told their followers that "it was not their Sunni neighbors who were killing them but foreign `Wahhabis.`" [11]

An alleged plot to assassinate Sistani was foiled on January 29, 2007, when three Jund al-Samaa gunmen were captured at a hotel near his office. It is believed to have been part of a larger attack against a number of targets in Najaf.[12] 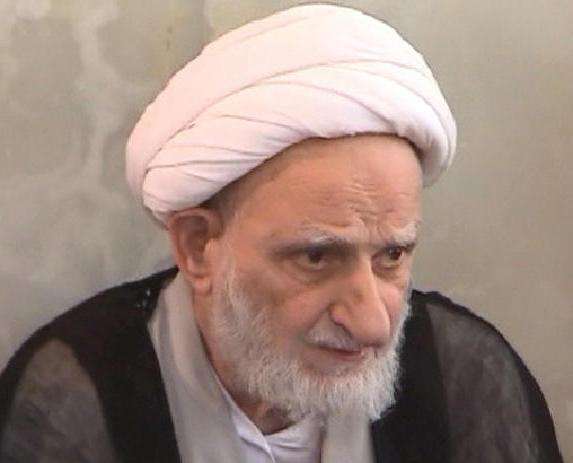 Ayatullah al-Uzma Shaykh Muhammad Taqi Behjat was was born in 1915 in the city of Fuman, Iran.His father, Karbalai Muhammad Behjat was a trustworthy and reliable personality of that region. Ayatullah al-Behjat finished his primary education in one of the schools in Fuman. Later on, in that same city, he began his religious education until the year 1929, when he made the journey to Qum.